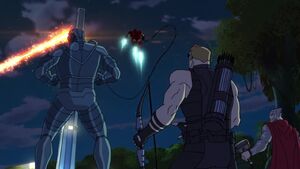 He's absorbed too much gamma radiation. He's nothing but a weapon now. A perfect one.

Appearing in "Building the Perfect Weapon"

Synopsis for "Building the Perfect Weapon"

Following Truman Marsh replacing Hulk with Red Hulk, the Avengers fight off an invasion of Rock Trolls. Afterwards, the Avengers must stop Leader from building and unleashing his secret weapon with stolen A.I.M. technology even when he uses Ultimo on them. Meanwhile, Hulk had been placed in an obedience collar and wanders around while figuring out what to do next.

Retrieved from "https://marvel.fandom.com/wiki/Marvel%27s_Avengers_Assemble_Season_3_21?oldid=5796001"
Community content is available under CC-BY-SA unless otherwise noted.