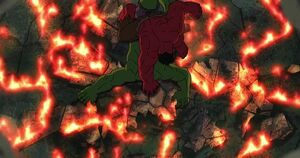 Hulk. Look at me. Focus. Focus on me, on my voice. They need you. Your team needs you. It's time to be the hero, Hulk. Be strong and end this.

Retrieved from "https://marvel.fandom.com/wiki/Marvel%27s_Avengers_Assemble_Season_3_22?oldid=5773564"
Community content is available under CC-BY-SA unless otherwise noted.