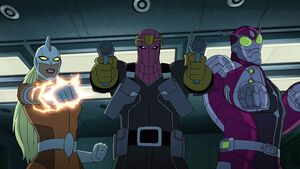 That was my father. I share with him a name and a pure hatred for Captain America. I share with you a hate for the Avengers, and I offer you Masters of Evil a way to eliminate them, permanently.

Appearing in "Under Siege"

Synopsis for "Under Siege"

Retrieved from "https://marvel.fandom.com/wiki/Marvel%27s_Avengers_Assemble_Season_3_4?oldid=5746755"
Community content is available under CC-BY-SA unless otherwise noted.