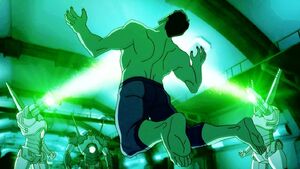 This is why you could never be a hero. Real power comes from inside, from who you really are. From all parts of who you are!

Bruce Banner's old lab assistant Igor Drenkov attacks leads his group called the SteelCorps in a fight against the Avengers and uses a gamma energy-stealing weapon on Hulk. Now depowered, Bruce has to show the other Avengers he still their teammate as Igor Drenkov plans to use the stolen gamma energies to become the hero he wanted to be.

Retrieved from "https://marvel.fandom.com/wiki/Marvel%27s_Avengers_Assemble_Season_3_8?oldid=5774690"
Community content is available under CC-BY-SA unless otherwise noted.