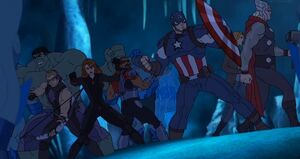 After my Cabal scattered your Avengers and left Earth undefended, I was free to spread my wings and take what I wanted. I've won. The Earth that you love so much belongs to me. And if you so much as lift a finger to try and take it back, I'll tear this little world apart.

Appearing in "The Return"

Synopsis for "The Return"

Like this? Let us know!
Retrieved from "https://marvel.fandom.com/wiki/Marvel%27s_Avengers_Assemble_Season_4_13?oldid=6498340"
Community content is available under CC-BY-SA unless otherwise noted.