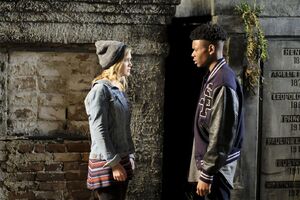 I'm afraid that even if you do everything perfectly I'm gonna lose you!

Tandy Bowen is picked up from ballet practice by her father, Nathan, a scientist for the Roxxon Corporation. On the drive back home, Nathan tries to warn Roxxon about the coming storm making their oil rig dangerously unstable. Nearby, Tyrone Johnson steals a radio from a car to impress his older brother, Billy. Billy wants him to return the radio, but before they can they are stopped by the police. Recognizing the police are not there to help them, the two boys run away from the police. They corner Billy at the harbor while Tyrone helplessly watches from the shadows. One of the police officers reflexively shoots Billy multiple times when the Roxxon oil rig suddenly explodes. As Billy's body falls into Lake Borgne, Tyrone Jumps in after him. Nathan, distracted by the explosion, gets into an accident with a large truck, sending his car off the road and into the lake. Nathan is killed instantly, leaving Tandy helpless as water fills the car and the truck falls into the lake on top of them. A wave of energy from the rig imbues Tyrone and Tandy with powers over darkness and light, respectively. Tyrone is instinctively drawn to the Tandy's light. Their powers work together to allow Tyrone to pull Tandy from the car, and the two children later wash up on the beach.

Roxxon would pin the blame for the oil rig's destruction on Nathan, driving Tandy and her mother, Melissa, into a life of poverty. The New Orleans Police Department falsifies Billy's autopsy to show he had drugs in his system when he died and was not shot by a police officer. Even though Tyrone can describe the officer who shot Billy, the chief says he doesn't know a police officer who looks like that, and further uses security footage of Tyrone stealing the radio to discredit him.

Several years later, Tandy makes a living as a thief with her boyfriend, Liam. She tricks a man, Rick, into taking her back to his place so she can drug him and they can steal his valuables, including tickets to a ballet. Tyrone attends a prep school, and emotionally suffers as his parents put so much pressure on him to be perfect so he doesn't end up like Billy. He is thrown out of his basketball game after getting into a fight with one of the players from the other team, and then listens to music to escape the sounds of his parents fighting. The next night, Tandy and Tyrone go to the same party in the woods. Their awkwardly introduced to each other when Tandy literally bumps into him and picks his pocket. Tyrone chases her to a nearby cemetery once he realizes she stole his wallet. Their powers reawaken when they touch hands and they are violently repelled from each other. Tandy can hardly make sense of the bright light coming from her hand, but once she sees the shadows surrounding Tyrone's she recognizes him as the boy from the beach. She runs away in a flash of light, and later has sex with Liam in his truck. Tyrone goes home to sleep, but wakes up with his sheets on the roof of the Roxxon building.

The next morning, Tandy's mom tries to talk to her about bringing another lawsuit against Roxxon when she notices Tandy wrapped her hand in bandages. When Melissa grabs her hand, Tandy is drawn into a memory of her mother and father helping her get ready for ballet. Tyrone sees the officer who shot Billy while he's making his way back home. He also catches his name - Connors. Tyrone researches the officer's identity once he gets back to his room, and that night gets into an argument with his mother about the pressure she puts on him. he tries to go to sleep, but is suddenly transported to the trunk of Connors' car. Connors is meeting with someone to sell cocaine he stole from evidence. When he opens the trunk, Tyrone throws the cocaine in his face, attacks him with a tire iron, and makes a run for it. Connors corners him in a nearby warehouse. The corrupt police officer grabs Tyrone by the neck, drawing Tyrone into his memory of the night he killed Billy. Before Connors can shoot him, Tyrone jumps into a tarp and is transported back to his room in a cloak of darkness. Tandy, meanwhile, is cornered in an alleyway by Rick and his friends after leaving the ballet. As Rick tries to rape her, Tandy stabs him with a dagger of light.

Retrieved from "https://marvel.fandom.com/wiki/Marvel%27s_Cloak_%26_Dagger_Season_1_1?oldid=5511501"
Community content is available under CC-BY-SA unless otherwise noted.