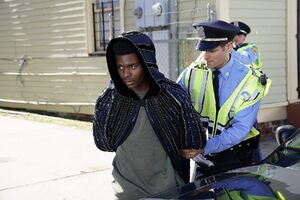 Hold my hand. We'll show these assholes a divine pairing.

Tandy and Melissa fight off Peter Scarborough's assassin. With her mother safe, Tandy hurries to Mina's just in time to save her from two "Terrors," people driven insane by the substance Roxxon was drilling for under the gulf. When Tandy explains to her what they are, Mina realizes the pressure valves she installed all over the city must also be failing, turning countless more innocent people into Terrors as well. Tandy and Mina confront Peter Scarborough so he can shut down the core controlling all the pressure valves. However, he reveals they have lost the ability to shut it down remotely, and they will have to go to the annex building where it is stored and shut it down manually. As a parting gift, Tandy goes inside Peter Scarborough's hopes and leaves him trapped in his own mind. Tandy and Mina try to make their way through the city, but quickly find themselves overwhelmed by Terrors. They take shelter in a nearby warehouse, but Mina one of the Terrors touches Mina and transforms her into one as well.

Meanwhile, Tyrone runs into his father when he tries to get Billy's cloak from the Wild Red Hawks. Otis tells Tyrone to run away and don't contact them for his own safety. The police arrive to question the Red Hawks about Tyrone's whereabouts, so Tyrone teleports away with Billy's cloak. He tries to hide in the crowds of tourists who came to New Orleans for Mardi Gras, but is quickly spotted by the police. O'Reilly tries to help him escape, but Tyrone is afraid to use his powers in front of so many people. Both Tyrone and O'Reilly are arrested and taken back to the police station. The two of them are kept in the evidence locker so they don't have to be booked and can instead wait for Connors to get there. Tyrone tries to convince the police officer watching them to let them go, but just as it seems Tyrone has gotten to him, he asks another officer to look after them instead. Connors arrives and tells them how he's going to stage their deaths. Suddenly, the station is overrun with Terrors. Tyrone and O'Reilly take advantage of the confusion to escape from the evidence locker. O'Reilly helps Tyrone find his cloak so he can teleport to safety, but Tyrone wants to stay and help her and the other (still sane) police officers fight the Terrors. Tyrone makes the Terrors chase him into one room so a police officer can lock them inside. The Terrors rip up Tyrone's cloak in the process, but he teleports away, suddenly appearing in front of Tandy just in time to save her from Mina.

Tandy and Tyrone retreat to Tandy's church. Just as the two of them feel defeated, Evita suddenly appears in the church to tell them about the "Divine Pairing" - two people who rise up to save New Orleans from a crisis, although one of them has to die. Tyrone is still unsure he can do this, especially without Billy's cloak. Tandy surprises him with Billy's hoodie, the one he wore the night he died. It was the first thing Tandy ever stole. Tandy and Tyrone head toward the Roxxon annex building where they can find the core. They again find themselves surrounded by Terrors. O'Reilly tries to help them from a distance, but she's ambushed by Connors. He accidentally shoots a nearby pressure valve, infecting O'Reilly with the substance buried under the gulf. Connors thinks she's finished and kicks her body into the water.

Tandy and Tyrone make it to the annex, but they are confronted by Connors with a shotgun. The two of them surprise him with their powers and destroy his gun. Tyrone teleports himself and Connors to the roof of the annex building and threatens him. Connors pulls out another gun, but Tyrone's powers pull Connors into another dimension before he can fire a shot. Tyrone returns to Tandy on the ground, and realizing he is the one who has to die, teleports into the annex to shut down the core. As he shuts down the core, Tandy cuts her way in with her light daggers. She tries to convince him that he doesn't have to do this alone. Tyrone realizes that the energy coming from the core is the same energy that is created when they touch. Tandy and Tyrone take each other's hand, and use their powers in tandem. Tandy focuses the energy from the core into one of her daggers, and then Tyrone teleports them to the roof of the Superdome so they can release that energy safely into the sky.

The "hysteria" that swept through New Orleans end by the next day. Tandy comes home with her things from the church, and shows her mom a newspaper with a headline explaining how Roxxon was responsible. Tyrone takes his things from his room, teleporting away before the police even know he's there. He is settling down in Tandy's church when Tandy surprises him with a "care package." He thought she didn't know how to care, but she says she's learning.

Elsewhere, O'Reilly washes up in the bayou with mysterious new abilities and glowing yellow eyes.

Retrieved from "https://marvel.fandom.com/wiki/Marvel%27s_Cloak_%26_Dagger_Season_1_10?oldid=5511485"
Community content is available under CC-BY-SA unless otherwise noted.