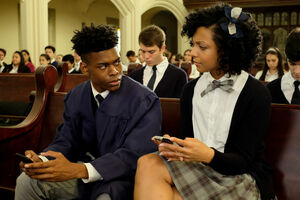 Detective Brigid O'Reilly leads the investigation into the assault on Rick, the man Tandy stabbed with a dagger of light when he tried to rape her. Tandy realizes she needs to get out of town quickly whether or not Rick survived his wounds. Liam takes her to Elmer, who can give her a new identity. Tandy goes back home to get the money she needs to pay him, but finds her mom and her boyfriend stole her money and spent it on drugs. To get the rest of the money they need to pay Elmer, Tandy and Liam crash a wedding so they can rob the guests and steal the money given as gifts. Tandy has a nervous breakdown when, while dancing with Liam, she's drawn into his thoughts of living the rest of his life with her. She wonders if her mom is right about her always running away when things get rough, but she meets a woman in the bathroom who tells her to go back out and dance and worry about tomorrow tomorrow. Tandy and Liam get what they need from the reception, and then make a break for it in the newlyweds' getaway car. When they get back to Elmer's, Tandy breaks up with Liam. Not long after she leaves him, Liam is arrested by Detective O'Reilly. Liam uses his phone call to call Tandy and ask for her help, but she hangs up on him and continues to drive away.

Tyrone skips school so he can follow Detective Connors. He loses track of time and ends up being late for practice. When he gets back to school, he sees his basketball coach is making the rest of the team run suicide sprints because of Tyrone's actions. The coach makes Tyrone sit out practice so he can watch and think about what he's putting the rest of the team through. Tyrone stays behind after practice, however, so he can run the sprints the rest of the team ran because of him. Once he's finished, however, he's attacked by three of his teammates in the locker room. Tyrone is unable to use his powers to get away and is beaten senseless. When he regains consciousness, he breaks out of the cage his teammates locked him in. He again tries to follow Connors, but is almost caught when he accidentally makes a noise with the bat he brought with him. Returning home, he talks to his mother, and is drawn into her thoughts of losing both Billy and Tyrone to senseless violence. That night, Tyrone steals his mother's gun and goes to Connors' home to kill him. Just as Tyrone is about to pull the trigger on Connors, his powers suddenly transport him away. He ends up in the middle of a street, right in front of Tandy's car. The bullets intended for Connors are instead shot at her, causing Tandy to crash into a tree.

Retrieved from "https://marvel.fandom.com/wiki/Marvel%27s_Cloak_%26_Dagger_Season_1_2?oldid=5514869"
Community content is available under CC-BY-SA unless otherwise noted.