Tandy and Tyrone talk about what they saw in each other's dreams, and how they should get justice for Tandy's father and Tyrone's brother. They also experiment with their powers, again being thrown from each other when they touch like that night in the graveyard. Their talk comes to a sudden end when they get into an argument over who has had the more difficult life when Tandy mentions she contemplates suicide.

Tandy goes back home to ask her mother about the case against Roxxon. She also tries to warn her that her new boyfriend Greg isn't really trying to help them, but Greg suddenly shows up at the door with groceries. Tandy pretends to help Greg prepare the food so she can get close enough to him to see his dreams. Much to her surprise, she sees that Greg dreams about living a happy life with Melissa and Tandy. Later, she goes to Greg's office to help him on his case against Roxxon. Tandy's mom breaks up with Greg after dinner that night. Tandy tries to talk to Greg about this, but from outside his office witnesses an assassin kill Greg and burn his office down.

Tyrone, meanwhile, pretends to have his bike stolen so he can get inside the police precinct where Detective Connors works. He gets cold feet, however, and hurries home before he can find Connors. Tyrone's dad noticed he took his bolt cutters, and thinking he used them to steal something takes Tyrone to meet a group he belongs to called the Wild Red Hawks. There, Tyrone learns the Red Hawks were grooming Billy to be a "spy boy" like his father. Tyrone picks out one of the unfinished cloaks, which happens to have belonged to Billy. He promises his father he'll finish it for Billy.

The next day, Tandy tries to kill herself by jumping off a pier while tied up, but after going underwater uses one of her daggers to cut herself free. She goes to the burned-down remains of Greg's office and takes the information about Roxxon he stored in a safe. Tyrone goes to the police to speak with Detective O'Reilly. 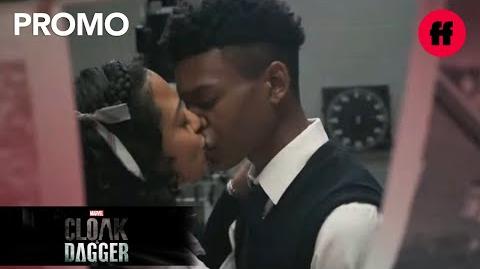