Once the wheel's turning... only the Divine Pairing can stop it from crushing us all under it.

Tandy, Tyrone, and Detective O'Reilly each get close to the person they need to know more about. To get close to Mina Hess, Tandy pretends to be a Roxxon intern assigned to her. She follows Mina into the bayou, where Mina conducts environmental research for Roxxon. She reveals that Roxxon is digging up a mysterious substance more valuable to them than oil from the Gulf, and part of her job is to install pressure valves that will prevent another catastrophe. Tandy slowly starts to ask Mina questions about her father, Ivan, who worked with Nathan Bowen. These questions, however, cause Mina to figure out who Tandy really is. Later, Tandy follows Mina to the nursing home where her father lives in a vegetative state. Tandy sees Ivan's dreams when Mina lets her talk to him. In his dreams, Tandy sees a door to the rig Ivan worked on surrounded by a dark energy resembling the energy Tyrone can create. Mina apologizes that Ivan couldn't tell her anything, but Tandy thinks she knows who can.

Tyrone tries to get closer to Duane by pretending he wants a job at his mill. When Duane turns him down, Tyrone takes to following some of guys who deal drugs for Duane instead. Detective O'Reilly, meanwhile, goes out with Detective Connors to look for the dealer she's been hunting. They try to arrest the dealers working for Duane. While Connors roughs one of the up and demands to meet with Duane, Tyrone grabs the bag containing all the drugs. He brings the bag back to Duane to earn his trust. Duane soon realizes Tyrone only wants to get close to Connors, and tries to send him away before Connors gets there. Tyrone hides in the back of Duane's mill, close enough to see Connors give Duane a gun and tell him to shoot O'Reilly when she comes in. Tyrone tries to warn O'Reilly, leading her to immediately shoot Duane in the chest. Connors chases after Tyrone, but Tyrone uses his teleporting abilities to first dodge Connors' bullets and then appear in Tandy's church. Tandy asks Tyrone what's wrong, but he's completely inconsolable. 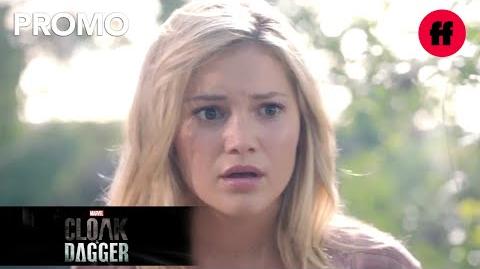