We want to see our heroes at their best. We root for them to save us all. To pull themselves out of their downward spiral. But sometimes the allure of the downward spiral is too strong. Sometimes our heroes are too weak. When that goes down, one of two things can happen. We either witness the death of our hero, or we realize we've been front row to the origin of something else. The birth of a villain.

Despite bringing down Scarborough and Connors, Tandy, Tyrone and Detective O'Reilly feel more defeated than ever. O'Reilly is prevented from participating in the investigation into Fuchs' death, so she instead spends the day drinking at a police bar. The chief of police informs Tyrone and his parents about Connors' confession, but this only leaves his parents terrified. Tandy, struggling to cope with what she learned about her father's abusive past, spirals back into her addictions, which now includes using her powers to steal other people's hopes.

The next day, Mina Hess invites Tandy over for brunch with her dad so she can offer Tandy a job at Roxxon. Ivan and Mina, however, keep bringing up Tandy's father, leading to Tandy stealing Mina's hopes when she pretends to accept the job offer. She later uses the money she got from Scarborough to bail Liam out of jail. She takes him back to the church so she can take away his dreams of getting married to her. Tyrone, meanwhile, is called into Father Delgado's office after he gets into a fight in school. Father Delgado tries to get Tyrone to talk about what is really bothering him, but the war of words between the two escalates to the point that Tyrone takes a swing at him. Delgado puts Tyrone in a hold, dragging him into his fears. Tyrone sees the scene of a car accident, with Delgado at the wheel and a dead young girl nearby. Somehow, Tyrone finds his way into Liam's dream, only to see Tandy stealing his hopes.

Tandy confronts Tyrone at his school while Evita tries to talk to him about what he's going through. Tandy tries to steal Evita's hopes when he gets between her and Tyrone, but Evita somehow gains control over her dreams and throws Tandy out. Evita recognizes Tandy as the other half of the Divine Pairing with Tyrone and runs away in a hurry. Tandy and Tyrone continue their argument over which of them has it worse and why Tyrone was in her head, ending with Tandy threatening Tyrone with her light daggers. Meanwhile, Connors shows up at the cop bar to toast Officer Fuchs. O'Reilly attacks Connors with an old billy club called the "Back Breaker" hanging on the wall, and gets one good hit in before other officers restrain her and take the club away from her. Connors proceeds to beat her up, taunting her about how she thought she would be able to put him away. As she stumbles to her car, O'Reilly hears a suspect in Fuchs' murder has been identified.

Tandy returns to the church, only to find Liam has ransacked the place and taken the money from Scarborough. Elsewhere, Mina Hess arrives at the scene of a faulty pressure valve just in time to see it rupture. Two other Roxxon workers are exposed to the mysterious substance that transforms them into "Terrors." Tyrone goes home to ask his mom about why she did nothing about Billy. She reveals she and Tyrone's father were afraid that the cop who killed Billy and his friends who helped him cover it up might go after Tyrone to tie up loose ends. Tyrone, however, thinks that if they could come after him anyway, he might as well fight for a better world. Just then, the house is surrounded by the police, there to arrest Tyrone for the murder of Officer Fuchs. Tyrone escapes through a window without grabbing his cloak. Tandy, meanwhile, goes home as well to talk to her mom about her relationship with her father, but the Roxxon assassin who killed Greg is there waiting for her. While Tandy takes cover, the assassin holds her mother hostage, and threatens to shoot her if Tandy doesn't come out. 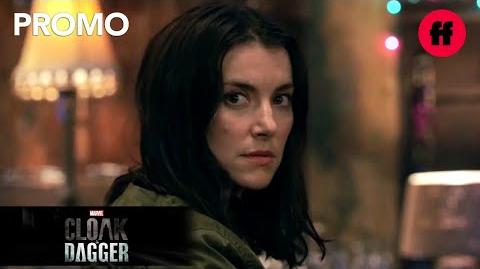