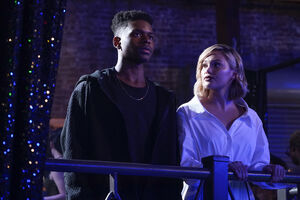 Tandy and Tyrone adjust to their new lives. Tandy has taken up ballet again, and tries to reconnect with her mother, including going to a support group for survivors of domestic abuse with her. Although Tandy appears to not pay attention during the group's sessions, she secretly tries to protect each of them from their abuser. When a new girl, Mikayla, appears reluctant to leave her abusive boyfriend, Tandy breaks into his house and ransacks it, carving a message reading "LEAVE HER ALONE" on a wall. This backfires, however, as Mikayla shows up to the next meeting to tell them the incident reminded her of how vulnerable her boyfriend really is.

Tyrone, still wanted for Officer Fuchs' death, uses his teleportation abilities to keep tabs on his parents and Evita while otherwise being stuck inside the church. He also goes after one of the city's gangs, breaking into one of their stash houses and grabs their drugs and money. He hands that over to O'Reilly, but she warns him that he's only made the gang paranoid and more likely to attack a rival gang. Tyrone goes after that rival gang, but this time is caught trying to steal from them. Tandy caught on to what Tyrone was up to, and helps get him out of the stash house.

O'Reilly gets a call from her captain telling her about the hit on the other gang's stash house, and that the two gangs are having a sit-down in a club's back kitchens to prevent a war between them. Tyrone was waiting outside O'Reilly's apartment and overhears the whole thing. He tries to make things right by going to the club with Tandy and planting a recording device that will catch the gang leaders confessing to their crimes. Everything seems to go according to plan until Tyrone sees through a window that a brawl has broken out in the back kitchens. They go to the back kitchens to intervene, but find everyone dead.

Retrieved from "https://marvel.fandom.com/wiki/Marvel%27s_Cloak_%26_Dagger_Season_2_1?oldid=5511448"
Community content is available under CC-BY-SA unless otherwise noted.