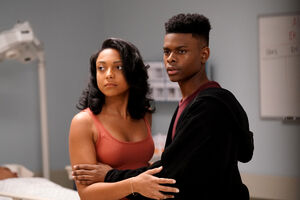 The sit-down between the two rival gangs has ended in a disaster. One of the gang members draws a Vodun symbol on the ground before dying. Tandy and Tyrone call O'Reilly, who is furious that they have again made things worse. She makes them leave, and then makes an anonymous call to the police about the massacre. She then goes to a bar to get drunk while she avoids her captain's calls. When she runs out of the bar to throw up, she sees a second, more confident version of herself reflected in a puddle. O'Reilly's doppelgänger says it's time for her to take over.

Tyrone takes a drawing of the Vodun symbol to Evita's aunt Chantelle. She tells him its the veve of Maman Brigitte, a loa associated with death. Evita suddenly comes home and sees Tyrone for the first time since his disappearance eight months earlier. He tries to explain to her why he hasn't tried to contact her in all that time, even showing her his teleportation abilities, but his excuses have no effect on her. Later, he draws the veve himself, and is suddenly teleported inside an ambulance with Mikayla, the girl from Tandy's support group. She says the men driving the ambulance grabbed her, and begs Tyrone to help her escape. One of the kidnappers notices Tyrone and starts shooting at him, forcing Tyrone to teleport out of there without Mikayla.

Some time earlier, Tandy blew up at Mikayla during group for still wanting to have a relationship with her abusive boyfriend. She starts to get worried when it seems Mikayla hasn't been seen since she left the last session, but Lia, the leader of the support group, thinks she might be laying low with a friend because of Tandy's outburst. Andre, a counselor from another support group, takes Tandy for a walk to get at the heart of what's bothering her. During the walk, she has a vision of her father that causes her to lose control over her powers and fry a parked car's taillights. Andre brings her to a memorial for missing girls surrounded by their grieving parents when he gets a call from Lia saying Mikayla was found over-dosed on heroin and rushed to a hospital. Tandy hurries to the hospital and finds Mikayla unconscious. She goes inside Mikayla's mind, and sees her trapped inside an ambulance and injected with heroin. A nurse tells her a private ambulance dropped her off without signing any paperwork.

The newly-confident O'Reilly investigates the massacre at the club. She goes to the house of one of the dead gang members to question his wife, threatening her by ripping up a painting her dead husband should not have been able to afford. She gives up that her husband had another business running private ambulances. O'Reilly goes to the ambulance company's lot, and finds Tandy trying to break in. Together, Tandy and O'Reilly try to apprehend an ambulance driver who they think abducted Mikayla. As the driver tries to get away, Tandy - fueled by thoughts of her father and Mikayla's abusive boyfriend - conjures a large ball of light and throws it at the ambulance. The driver is thrown from the ambulance as it flips over. Tandy and O'Reilly force a confession from the driver, but he doesn't know where the other girls are.

Meanwhile, Evita (partially) forgives Tyrone and helps him properly draw Maman Brigitte's veve. They're first teleported to the still-unconscious Mikayla, but Tyrone has to keep a low profile to avoid the cops. He then teleports to O'Reilly's apartment to tell her what he found. He finds O'Reilly bound and gagged on the floor of her apartment. Tyrone helps her get free, but she warns him that they're in danger. Tyrone teleports both of them to Tandy, who is still at the lot. Tandy is surprised to see O'Reilly with Tyrone, because O'Reilly's doppelänger is standing over the ambulance driver's corpse.

Retrieved from "https://marvel.fandom.com/wiki/Marvel%27s_Cloak_%26_Dagger_Season_2_2?oldid=5511446"
Community content is available under CC-BY-SA unless otherwise noted.