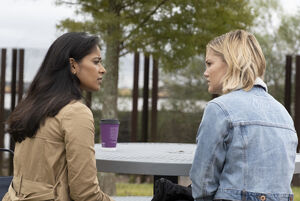 Tyrone uses the veve of Maman Brigitte to find Connors waiting for him at the place where he murdered Tyrone. Connors, surprisingly, wants to help Tyrone clear his name and bring himself to justice for killing Billy and Officer Fuchs. All that time alone in Tyrone's cloak gave Connors time to think about what he's done. Although Tyrone doesn't fully believe him, he takes Connors to his father, who lives with Choo Choo since he separated from Tyrone's mother. Tyrone stops Otis from killing Connors, and they instead bind him to a chair. Connors says that he could still get away without as a much as a jail sentence even if he fully confesses due to the power of his uncle, State Senator Asa Henderson. Connors comes from a powerful family in Louisiana politics that were one of the founders of the highly prestigious Promenade Society. After he murdered Billy, State Senator Henderson used his connections to keep Connors out of jail. In order for both himself and his uncle to go to jail, Connors says Tyrone will need to steal the "Monopoly File," a document his uncle keeps listing the secrets of anyone of consequence.

Tandy runs into a dead end with her investigation into the human traffickers. Andre suggests her support counselor Lia might know something about what's happening to the abducted girls. Tandy concocts a story about having an abusive ex who brought out the worst in her, hoping this common ground would get Lia to open up about what she knows. She convinces Lia to come with her to confront this ex, who she tries to pass off as Tyrone. He didn't know about Tandy's plan, however, as he only wanted Tandy's help in stealing the Monopoly File. When he figures out Tandy's plan, Tyrone gets offended that she would call her black friend to play that part and leaves. Afterwards, Lia opens up about her abusive ex Eric, the owner of the largest grow house in New Orleans who used to pimp her out to important buyers. Tandy thinks Eric knows where the abducted girls are going, and gets the address of his grow house from Lia.

After stealing a key off State Senator Henderson, Tyrone has O'Reilly fake a bomb threat at the Promenady Society's clubhouse. With the building evacuated, Tyrone sneaks into the cellar to find the empty bottle where Connors says his uncle keeps the Monopoly File, only to find it empty. Tyrone teleports back to Choo Choo's house to grab Connors and take him back to the church. Tyrone, convinced he was set up, holds Connors over a balcony by his neck. He gets to look inside Connors' fears, and sees genuine guilt over how long he's evaded justice for murdering Billy. Instead of killing him, Tyrone brings Connors to Adina so they can talk about justice. Meanwhile, Tandy breaks into the grow house and fights Eric and his men. Tandy is temporarily blinded when one of the growers pepper sprays her, but she summons a ball of light to blind them as well. Even with Tandy standing over his beaten body, Eric insists he doesn't know anything about the ambulances abducting girls. Lia is waiting outside for Tandy when she walks out of the grow house. Lia uses a taser on Tandy as one of the ambulances approaches them. As Tandy comes to, she's strapped down inside the ambulance.

Retrieved from "https://marvel.fandom.com/wiki/Marvel%27s_Cloak_%26_Dagger_Season_2_5?oldid=5511443"
Community content is available under CC-BY-SA unless otherwise noted.