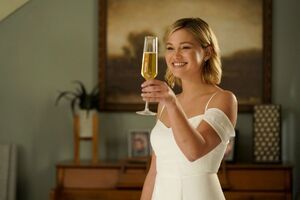 Appearing in "B Sides"

Synopsis for "B Sides"

Tandy is trapped on the ambulance with Lia and Andre, both revealed to be working with the human trafficking ring. Andre is somehow keeping her unconscious by placing her mind in different scenarios represented by the albums in the record store Tandy found when she was pulled into Tyrone's cloak. Each of these scenarios reflect an alternate reality. In one, Nathan Bowen and William Johnson survived the night of the Roxxon explosion, Tandy became a professional dancer, and Tyrone became a police officer with Connors as his mentor. In another, Tandy is a Roxxon engineer working on their rig with Tyrone and his brother with Mina Hess as their supervisor. In a third, she is a con artist who makes Tyrone - a car thief in this reality - help her escape after Liam and Mikayla catch her trying to rob them. When each of these fail to keep Tandy down for long, Andre makes the scenarios bleed together until finally confronting her himself in the record store. Andre reveals he tried to kill himself in Lake Borgne on the night of the Roxxon explosion, giving him powers over peoples' despair similar to Tandy's powers over their hopes.

Tandy wakes up in the ambulance with Lia and Andre nowhere to be seen. She shares what she's discovered with Tyrone and O'Reilly so they can stop the trafficking ring. Tyrone takes Tandy to Andre while O'Reilly deals with the police. Although Tandy and Tyrone appear to have Andre cornered, Lia appears holding Mikayla with a knife to her throat. While they're distracted trying to save Mikayla, Andre pulls out a gun and kills Tyrone. This is revealed to be another of Andre's scenarios, designed to keep Tandy unconscious long enough for them to drop her off at the Viking Motel.

Retrieved from "https://marvel.fandom.com/wiki/Marvel%27s_Cloak_%26_Dagger_Season_2_6?oldid=5511442"
Community content is available under CC-BY-SA unless otherwise noted.