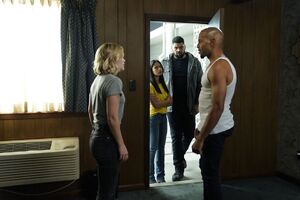 You can't pull that trick on me, or anyone else. Not anymore. You need hope for that. And there's none of that here.

Andre and Lia hold Tandy at the Viking Motel, where they operate the sex trafficking ring from. She finds herself unable to summon her daggers because she is in a place, as Andre puts it, without hope. Andre explains that using his powers on other people to feel their pain is the only way to calm down his migraines. Tandy meets Del, another of the trafficked girls, who Lia holds a cult-like influence over. Lia makes Del punish Tandy with a paralyzing smoke when she tries to escape. When she regains consciousness, Lia has dressed Tandy up to be prostituted out that night.

Tyrone runs into Andre while looking for Tandy. Andre uses his powers to convince Tyrone that Tandy does not care about him, persuading him to give up on his search. Andre also goes after Evita's aunt Chantelle after learning about her from Tyrone's memories, believing she can do something about his headaches. He takes her to his metaphysical record store so she can explain his personal veve drawn on a door in the back of the store, only to find it in disarray - ransacked by Mayhem while Andre was away so she could play other records that motivate Tyrone to continue looking for Tandy. Chantelle explains that Andre could become a loa if he unlocks his veve and opens the door, but refuses to help him as she can see he is already a monster. With no more use for her, Andre kills Chantelle by stopping her heart with one of his records.

Meanwhile, Adina considers killing Connors to avenge Billy's death instead of leaving him alive to clear Tyrone's name. He tells her Billy's corpse was replaced with another body to further cover up how he died. Connors tries to steal her knife while she's dealing with Otis when he suddenly shows up at her house to talk to her about Tyrone, but is unable to. Connors convinces her to let him live when he tells her Billy's body is buried under a horse stable.

Tyrone hijacks one of the trafficking ring's ambulances to assault the Viking Motel. Tandy learns from Del that Lia told them the girls she, Tyrone and O'Reilly rescued at the bywater were actually executed. Tandy tells her the truth about what happened to them, forcing Del to start to doubt what Lia tells her. She steals a phone when no one's looking, and finds her mother - who Lia said abandoned her - has actually been looking for her and placing missing person fliers all over the city. Del stands up to Lia, her newfound hope allowing Tandy to summon her daggers just as a John enters her room. Suddently, Tyrone crashes the ambulance into the front of the hotel. Tandy takes advantage of the confusion to cut out of her room, save Del from Lia, and free the other girls. Tyrone, meanwhile, fights Lia's bodyguard. Once Tandy and Tyrone find each other in the motel, Tyrone's body is consumed by the energy in his cloak, and he disappears.

Retrieved from "https://marvel.fandom.com/wiki/Marvel%27s_Cloak_%26_Dagger_Season_2_7?oldid=5511441"
Community content is available under CC-BY-SA unless otherwise noted.