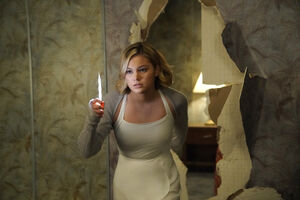 Tell you what... You play his game, and if you can convince him to leave, I'll let you both go. But don't forget - you in Samedi's house. And the house always wins.

Evita helps Tandy figure out what happened to Tyrone. She recognizes the entity Tandy met the last time she was pulled into Tyroe's cloak as Papa Legba, a powerful Vodun god who Auntie Chantelle was married to. Evita conducts a ritual to open a portal to the dimension in Tyrone's cloak, and Tandy and O'Reilly jump in. They encounter Papa Legba, who appears to Tandy as her dance instructor, and to O'Reilly as Fuchs. Tandy came with an offering for Papa Legba, so she does not have to give up her powers to go deeper into his realm. To Tandy's surprise, the mall she found the last time she was in this mysterious place has been replaced by a carnival arcade.

In the real world, Andre and Lia steal a car, but Andre's migraines prevent them from moving on. Lia lets Andre listen to her despair to calm his migraines. Adina sees Delgado, hoping he can use his privilage as a priest to turn over the information Connors gave her to the right people without having to give up his source. Delgado reminds her that he's given up the priesthood, but she convinces him to take up the cloth again. Delgado holds an impromptu confession for Adina to hand over the information, but she also confesses to killing Connors. Meanwhile, O'Reilly is caught by Mayhem and brought to Andre's record store. O'Reilly brings her counterpart up-to-speed with what's happened involving Andre, the missing girls, and the Viking Motel. They also reminisce about their childhood, eventually ending up in a salon to get their nails done. O'Reilly thinks this situation really needs someone like Mayhem, and offers to let her "drive" their body until it's resolved.

In the carnival, Tandy finds Baron Samedi, the loa of death, keeping Tyrone as his prisoner. Baron Samedi offers to let them both go if Tandy can play his game and convince him to leave, but warns her that she won't be able to. Samedi has Tyrone hypnotized with an arcade game called "Duel in D'Spayre," where Tyrone plays a video game version of himself as he fights through waves of criminals working for the evil D'Spayre. An in-game version of Tandy appears to help Tyrone once she joins the game. After the first level, Tandy and Tyrone are pulled into the game, and continue playing it as if they are really fighting D'Spayre's minions. The final level of the game is revealed to be a re-creation of the Viking Motel. They cut through the Motel's walls until they reach D'Spayre, who is revealed to be Andre. Rather than fight the final boss, Tandy chooses to give up playing the game, forcing Tyrone out as the game starts over. Tyrone breaks down and admits he's tired of going out to do good only to "tie" the bad guys, but also that he went to the motel because he can't imagine his life without Tandy in it. Samedi pressures Tyrone to make his decision, only to find it's been made for him. Evita, with advice from her aunt's spirit, chose to follow in Chantelle's footsteps and married herself to Baron Samedi - trading her life for Tyrone's.

That night, Andre, fully recovered from his migraines, discovers the stars on his veve are musical notes, and leaves an unconscious Lia abandoned on the side of the road as he drives away. Tandy goes home to find her mom not there and bottles all over the house, Melissa's alcholism apparently having relapsed. Mayhem - now sharing a body with Brigid - burns down the Viking Motel.

Retrieved from "https://marvel.fandom.com/wiki/Marvel%27s_Cloak_%26_Dagger_Season_2_8?oldid=5380703"
Community content is available under CC-BY-SA unless otherwise noted.