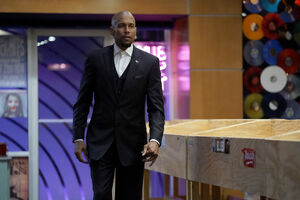 And then the crowds, the fans, the audience... They in your thrall. They're your's forever. That's the power of music. That's the blue note, baby. And there ain't nothing in this world more powerful than that.

Eight years ago, Andre Deschaine's promising career as a jazz musician was cut short due to his migraines, which left him unable to play his music. He gained his powers a few months later when he tried to kill himself due to his inability to play. Andre survived and was taken to a hospital, where he was treated by Lia, then just a medical student. Lia became Andre's first victim while caring for him, the first records placed in his record store, and he manipulated her into becoming his accomplice. Together, they would run the support group so Andre could meet desperate people and add their despair to the record store.

In the present day, Mayhem - now fully in control of Brigid's body - and Tandy find Lia, still unconscious and where Andre left her, and bring her back to the church. Tandy and Tyrone go into her mind to find Andre in there. As they discover how Andre manipulated her, Andre suddenly appears and tells them he will put together a big audience and use their despair to stop his migraines and ascend to another level. Because Tyrone is unable to use the veve to find Andre, he has Solomon set up a meeting between the Block Kings and the Money Hustle Gang so he can ambush them. Tyrone intimidates them into agreeing to no longer sell to human traffickers, and gets a tip that Andre will be at the Club Delight. Meanwhile, Tandy stops Mayhem from executing Lia for working with Andre because she sympathizes with her now that she knows how he's manipulated her.

Tandy and Tyrone go to the Club Delight, but Andre is not there. They discover the building was not the original location of the club, which burned down in a fire. Andre has assembled his audience consisting of Tandy's mom, Mikayla, and the victims of the trafficking ring in the burned-out remains of the club's original location. As he plays for them, his personal veve drawn in front of him glows as he gets closer to reaching the "blue note." Tandy and Tyrone find him before he finishes. Tyrone uses his teleportation abilities to send one of Tandy's light daggers right into Andre's chest. Andre and his audience, however, suddenly disappear. Andre appears in his record store, and the door locked by his veve starts to open. Tandy and Tyrone hear Andre's music playing all around them.

Retrieved from "https://marvel.fandom.com/wiki/Marvel%27s_Cloak_%26_Dagger_Season_2_9?oldid=5511439"
Community content is available under CC-BY-SA unless otherwise noted.