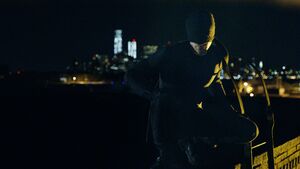 I'm not seeking penance for what I've done, Father. I'm asking forgiveness... For what I'm about to do.

Appearing in "Into the Ring"

Synopsis for "Into the Ring"

Like this? Let us know!
Retrieved from "https://marvel.fandom.com/wiki/Marvel%27s_Daredevil_Season_1_1?oldid=6498404"
Community content is available under CC-BY-SA unless otherwise noted.