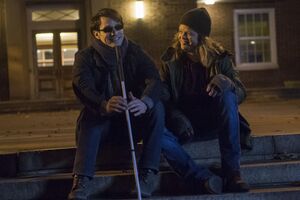 When I was a kid, before the accident... I'd lay awake at nights listening to the sirens. I liked to put stories to them. Trying to figure out what they were for, ambulance or cops, robbery or fire. I don't know, just a stupid game. But after I lost my sight, after my abilities developed, I realized how many sirens there actually were... How much this city suffered every single night.

Murdock and Foggy's relationship is put to the ultimate test while a new enemy against Fisk emerges.

Retrieved from "https://marvel.fandom.com/wiki/Marvel%27s_Daredevil_Season_1_10?oldid=5232496"
Community content is available under CC-BY-SA unless otherwise noted.