"The Path of the Righteous" 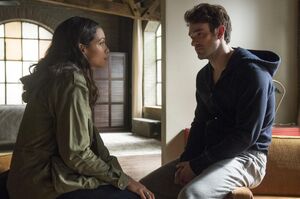 Episode Title
"The Path of the Righteous"

And yet, here we are. You know, funny story, after the Union Allied article, I... Inquired as to whether you needed further attention. The feeling was you'd already done whatever damage you could, so it wasn't necessary. You were a... Nobody... A very small cog in the machine. So, an offer was made through a third party. A legal agreement, one you signed... In exchange for a reasonable amount of money. Well... reasonable to you. You were supposed to go away, Miss Page. Fade back into... Wherever people like you fade. But you made a choice... And that choice has brought you here... On this night, at this particular moment in time. Perhaps that's the way it was always gonna be. Perhaps we're destined... To follow a path none of us can see, only... Vaguely sense, as it takes our hand, guiding us to the inevitable.

Appearing in "The Path of the Righteous"

Synopsis for "The Path of the Righteous"

Fisk and Murdock wrestle with the consequences of their chosen paths, while Ben and Karen get the closer to Fisk's true past.

Retrieved from "https://marvel.fandom.com/wiki/Marvel%27s_Daredevil_Season_1_11?oldid=5232497"
Community content is available under CC-BY-SA unless otherwise noted.