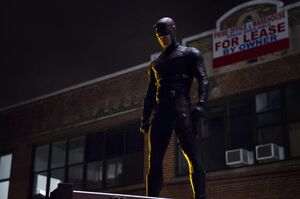 Lot of decisions I'd give anything to go back and change. But I can't. None of us can. It's like I told Foggy; all we can do is... move forward. Together.

In the season finale, a boxed-in Fisk and a desperate Murdock, Foggy and Karen are forced to play their end games.

Like this? Let us know!
Retrieved from "https://marvel.fandom.com/wiki/Marvel%27s_Daredevil_Season_1_13?oldid=6498408"
Community content is available under CC-BY-SA unless otherwise noted.