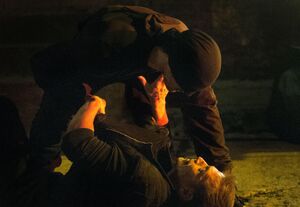 I've done things that I'm not proud of, Vanessa. I've hurt people. And I'm going to hurt more. It's impossible to avoid for what I'm trying to do. But I take no pleasure in it... In cruelty. But this city isn't a caterpillar. It doesn't spin a cocoon and wake up a butterfly. A city... Crumbles and fades. It needs to die before it can be reborn.

Appearing in "World On Fire"

Synopsis for "World On Fire"

Fisk moves forward with plans that threaten to rip Hell's Kitchen apart. Murdock and Foggy take on a case helping tenants victimized by a slumlord.

Retrieved from "https://marvel.fandom.com/wiki/Marvel%27s_Daredevil_Season_1_5?oldid=5232490"
Community content is available under CC-BY-SA unless otherwise noted.