"Speak of the Devil" 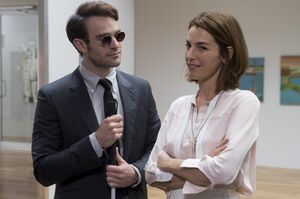 Episode Title
"Speak of the Devil"

There is a wide gulf between inaction and murder, Matthew. Another man's evil does not my you good. Men have used the atrocities of their enemies to justify there own throughout history. So the question you have to ask yourself is... Are you struggling with the fact you don't wanna kill this man... But have to? Or that you don't have to kill him... But want to?

Appearing in "Speak of the Devil"

Synopsis for "Speak of the Devil"

When Fisk gains the upper hand, the goal to destroy him becomes even more difficult, while Daredevil faces his own demons.

Retrieved from "https://marvel.fandom.com/wiki/Marvel%27s_Daredevil_Season_1_9?oldid=5347478"
Community content is available under CC-BY-SA unless otherwise noted.