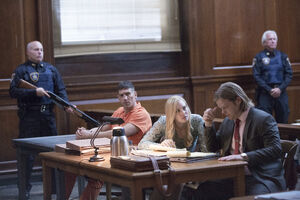 Frank Castle wanted to help. But he took it too far. He shot people. He killed people. It's against the law. And he broke the law many, many times. Now, I don't like him any more than you do, but here's the thing... he's not a common criminal. He's not malicious in intent. Frank Castle is actually a good man. He just doesn't know the difference between right and wrong anymore. And he doesn't need punishment for that. He needs help. Our help. That's the kind of man Frank Castle is, and now you have to decide what kind of jury you want to be.

Appearing in "Guilty as Sin"

Synopsis for "Guilty as Sin"

Retrieved from "https://marvel.fandom.com/wiki/Marvel%27s_Daredevil_Season_2_8?oldid=5327312"
Community content is available under CC-BY-SA unless otherwise noted.