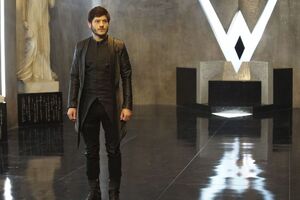 Maximus is king...of no one!

Appearing in "Divide and Conquer"

Synopsis for "Divide and Conquer"

News of Black Bolt's arrest reaches Dr. Evan Declan, a researcher in southern California. He contacts Sammy, a prisoner in the Honolulu county jail, with a plan for him to meet the Inhuman prisoner. Sammy has a guard bring Black Bolt to his cell, and the two inmates begin to bond when Sammy - to Black Bolt's surprise - describes Terrigenesis. Meanwhile, Louise fails to convince Captain Peña that Black Bolt is no ordinary prisoner.

In Attilan, Maximus sends Auran her back-up. Maximus frees a dangerous Inhuman prisoner named Mordis and sends him to Earth along with a number of royal guards. Auran objects to Mordis' inclusion on her team, but Maximus reasons he is the most powerful weapon Attilan has, second only to Black Bolt. Auran orders Mordis to stay back with another member of her team when they ambush Gorgon, but Gorgon and a surf gang of Afghanistan veterans set a trap for them. She only asks Mordis to intervene once the battle starts to go in Gorgon's favor. Mordis lifts up his mask, unleashing a powerful energy beam on Gorgon and the surfers. Auran's forces retreat after Gorgon stomps his hoof into the ground.

Elsewhere on Oahu, Medusa breaks into a home and steals a change of clothes. She sees a story about Black Bolt's arrest in a newspaper. Meanwhile, Karnak stumbles into a marijuana farm. The growers capture Karnak, tie him up in a shack, and talk over what they should do with him. Karnak sees a way out by kicking over a table, but when he does so the shack does not collapse like he predicted it would. The farmers eventually decide to trust him, but only after Karnak confides in one of them that his Inhuman powers have not been working right since he injured his head.

Sammy starts a riot to distract the guards so he and Black Bolt can escape from jail. During their escape, Sammy reveals himself to be an Inhuman, which is why he is so sympathetic to Black Bolt's situation. Once they're outside the prison's walls, a helicopter piloted by Dr. Declan picks up Black Bolt and Sammy, and takes off with them. Just as the helicopter leaves, Medusa breaks into the prison to rescue Black Bolt. Louise, who noticed this whole ordeal from her car, follows Medusa inside, but Medusa kidnaps her at gunpoint so she can take her to Black Bolt.

Maximus wants Crystal to give a speech to the Genetic Council declaring him as Attilan's king. Instead of delivering Maximus' speech, Crystal says he is the king of no one and makes a run for it. Maximus only uses her escape as proof of the Royal Family's treachery. Crystal finds Lockjaw and they escape to Earth. Lockjaw, however, is still too heavily sedated to move out of the way of an ATV that crashes right into him.

Retrieved from "https://marvel.fandom.com/wiki/Marvel%27s_Inhumans_Season_1_3?oldid=5243537"
Community content is available under CC-BY-SA unless otherwise noted.