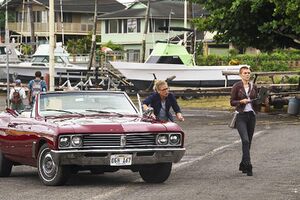 Appearing in "Make Way for... Medusa"

Synopsis for "Make Way for... Medusa"

Dr. Evan Declan takes Black Bolt and Sammy to his research facility on Oahu. Black Bolt lets Dr. Declan conduct tests on his Inhuman genetics and physiology in exchange for help in finding Medusa. After discovering the "perfection" of Black Bolt's genetics, however, Declan contacts Maximus - secretly his benefactor - he needs to keep Black Bolt alive so he can use his genes to better humanity by making them like Inhumans. Seeing this as a way for him to undergo Terrigenesis, Maximus agrees to Dr. Declan's plan, and orders Auran to keep Black Bolt alive. Later, Maximus violently disbands the Genetic Council when they refuse to let him be exposed to the Terrigen mist for a second time.

Medusa, meanwhile, continues her search for Black Bolt. She and Louise use Callisto's satellites to look for the helicopter that took Black Bolt from jail, all while on the run from the Honolulu police. Even though the two butt heads, they grow to respect each other as they work together. Elsewhere on the island, Dave takes Crystal to his ex-girlfriend, a veterinarian, so she can treat Lockjaw after Dave ran him over. Karnak grows closer to Jen, while another pot farmer becomes jealous of their relationship. Gorgon, Holo and his surf gang lay Lucky to rest and prepare for Auran's next attack.

Black Bolt and Sammy come to realize Dr. Declan is holding them prisoner, and make a run for it when they discover he is euthanizing Inhumans. They're ambushed by Auran, Mordis, and the Royal Guard during their escape. Black Bolt causes a gas leak to prevent Mordis from using his powers, as the energy it gives off would ignite the gas and incinerate them all. Suddenly, Medusa and Louise arrive at Declan's compound and run over Mordis. Mordis' mask falls off, sending a beam of energy straight towards the tank of gas. Auran and her all of her soldiers are incinerated in the blast except for Mordis and Locus. Black Bolt and Medusa, finally reunited, share a brief moment together before they drive off with Locus as their hostage (they hope she can use her powers to help them find the rest of their family) before Mordis can get to his feet.

Retrieved from "https://marvel.fandom.com/wiki/Marvel%27s_Inhumans_Season_1_4?oldid=5243539"
Community content is available under CC-BY-SA unless otherwise noted.