"Something Inhuman This Way Comes..." 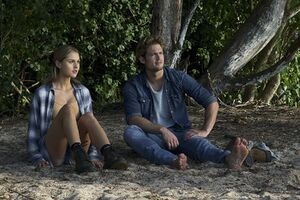 Appearing in "Something Inhuman This Way Comes..."

Synopsis for "Something Inhuman This Way Comes..."

Reno tries to kill Karnak and Jen. Karnak deflects his bullet, but accidentally redirects it towards Jen. While on the run from Reno, Karnak removes the bullet from her wound. Reno, meanwhile, calls in backup to help find Karnak and Jen, but they kill Reno when they realize he killed his partner, Ted. Karnak and Jen find the camp abandoned when they return to tend to her wound only to come under fire from Reno's backup when they return to harvest the crop. Karnak does his best to fight them, but he's eventually overwhelmed and they're both captured. However, they lit the crop on fire so Gorgon could follow the smoke to find them. Gorgon rescues Karnak and Jen, while the rest of the mercenaries are finished off by Black Bolt and Medusa - who, along with Louise, found them with Locus' help. Locus was mortally wounded in the fight. With her dying breaths, she pleads with Black Bolt to be the king Attilan deserves and change the caste system, and tells Medusa that Crystal made it to Earth.

Dr. Declan performs an autopsy on the member of the Royal Guard killed in the explosion, and is about to do the same to Auran when she suddenly awakens and heals herself with her powers. Auran grabs Dr. Declan by the throat and demand he tell her why he didn't kill Black Bolt. She contacts Maximus, who tells her that Declan is secretly working for him, and that his work is too important for Auran to disrupt. Mordis and Flora continue the search for Black Bolt with Sammy as their hostage. Sammy uses his powers to break free from Flora's vines, but but is soon recaptured. Mordis contacts Auran to tell her that they have Black Bolt's friend. Elsewhere, Crystal and Dave take Lockjaw to the other side of the island.

At Attilan, Maximus moves to send more Inhumans to Earth to find the members of the Royal Family, this time drawing from the city's lower castes. He orders Tibor to compile a list of the Inhumans best suited for the task. When he returns with the list, Tibor informs him that the lower castes are beginning to wonder if Maximus' mission is for them or just for himself, and that Bronaja's father was the only one to volunteer. Maximus, furious, demands Tibor leave him for daring to question his motives. Later, Tibor is surrounded by a group of Inhumans he believes Maximus sent to kill him, but really they are members of the lower caste ready to restore Attilan's rightful king to his throne.

Retrieved from "https://marvel.fandom.com/wiki/Marvel%27s_Inhumans_Season_1_5?oldid=5243553"
Community content is available under CC-BY-SA unless otherwise noted.