"The Gentleman's Name Is Gorgon" 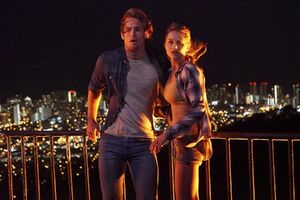 Appearing in "The Gentleman's Name Is Gorgon"

Synopsis for "The Gentleman's Name Is Gorgon"

Maximus sends a team of miners - including Bronaja's father Loyolis - to Earth to assist Auran in her hunt for Black Bolt. On Earth, Karnak and Gorgon take on Auran and her soldiers at Dr. Declan's research lab while Black Bolt, Medusa and Louise look for Crystal. Gorgon comes up with a plan to use Karnak's inability to use his powers to their advantage. Because Auran doesn't know his powers are not working, Karnak can throw them off guard by making bolder moves they think he was able to see the flaw in. Karnak takes down Flora and Mordis, the latter by appealing to how he spared him from the Genetic Council's judgment to distract him long enough to sneak up behind him and put Mordis in a sleeper hold. Gorgon fights Auran while Karnak takes on the miners and frees Sammy and Dr. Declan. With the rest of Auran's soldiers defeated, Gorgon tries to tie-up Mordis, but the dangerous Inhuman awakens and refuses to return to Attilan. Gorgon sacrifices himself to protect them Mordis by bringing the roof down on top of them.

Meanwhile, Lockjaw transports Crystal and Dave to a place just outside Honolulu. Crystal uses her powers to form lightning in the shape of the Royal Family's crest to help Black Bolt and Medusa find her. Once Black Bolt and Medusa reunite with her, they go back to Dave's barn to get Lockjaw so they can go home; however, Dave's ex-girlfriend Audrey called the police on Crystal and her dog. While Dave distracts the police, the Lockjaw takes the Inhumans to regroup with Karnak and Gorgon. Louise stays behind to help Dave deal with the cops by pretending to be his new girlfriend. Black Bolt, Medusa and Crystal find Gorgon dead under a pile of rubble, Karnak unable to save him after he took care of Mordis.

At Attilan, Maximus becomes increasingly paranoid after Tibor informs him of a conspiracy to remove him from the throne, leading him to rely even more on Bronaja's visions for guidance, one of which shows him with Tibor. Bronaja, however, grows disillusioned with Maximus' reign after he makes a comment about he's willing to sacrifice Bronaja's father and the other miners for propaganda. Maximus summons the rebellious members of the Royal Guard to his chambers, where he is already holding Tibor prisoner. After the rebels surrender, Maximus slits Tibor's throat and orders the others taken away. Maximus, furious that Bronaja might have withheld information about Tibor's betrayal, smears the dead councilor's blood on Bronaja's face to remind him that Maximus is the king.

The title of this episode comes from Fantastic Four #44, Gorgon's first appearance in the comics.

Retrieved from "https://marvel.fandom.com/wiki/Marvel%27s_Inhumans_Season_1_6?oldid=5243555"
Community content is available under CC-BY-SA unless otherwise noted.