"Havoc in the Hidden Land" 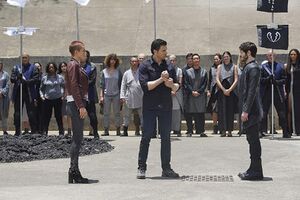 Appearing in "Havoc in the Hidden Land"

Synopsis for "Havoc in the Hidden Land"

The Royal Family recapture Auran and her soldiers, who escaped when Gorgon destroyed Declan's research facility. Knowing she can recover from it, Karnak snaps Auran's neck so her body could be sent back to Attilan as a message for Maximus. Lockjaw transports Crystal and Auran's body to Maximus' throne room. Crystal gives Maximus an offer for parley from Black Bolt, which Maximus accepts. When Crystal returns to Hawaii, the Inhumans head to a beach where Triton emerges from the water. Triton reveals that he and Black Bolt knew of Maximus' treachery all along, and allowed him to think his coup was going along as planned until they could find the right time to strike back. The Royal Family return to Attilan with Dr. Declan, taking refuge in a secret bunker beneath the city.

Black Bolt (with Medusa translating) and Maximus parley at midday. Black Bolt offers to let Maximus use Declan's research to undergo Terrigenesis for a second time - his motivation for launching the coup - if he ends this madness and returns Attilan's throne to its rightful king. Black Bolt hands over Declan when Maximus appears to agree to these terms, but once he has Declan safely in his custody, Maximus suddenly refuses Black Bolt's offer. The parley ends with Black Bolt promising his brother he will kill him the next time they meet.

The Royal Family returns to the bunker. While Medusa confronts Black Bolt over the secrets he has kept from her, Karnak comes up with a plan to use Declan's research to revive Gorgon via a second Terrigenesis. When Black Bolt and Medusa shoot down his plan citing the alleged dangers of undergoing Terrigenesis for a second time, Karnak goes off on his own to save his cousin. He ambushes Auran, who has since become disillusioned with Maximus' leadership once she learned of his true motives, and convinces her to let him use her DNA to revive Gorgon. Karnak's plan, however, appears to fail when the Terrigen mists do not revive Gorgon. Later, Maximus' second Terrigenesis is interrupted before it can begin when Attilan's infrastructure begins to fail. Triton ambushes Maximus as the royal guard move him to another part of the city. Triton kills the guards and drags Maximus to the bunker where Black Bolt is waiting for him. Before Black Bolt can kill him, Maximus reveals that he installed a kill switch that will destroy the shield protecting the city from the vacuum of space if he is killed. Meanwhile, Gorgon's corpse suddenly awakens, and menacingly stares down Dr. Declan.

Retrieved from "https://marvel.fandom.com/wiki/Marvel%27s_Inhumans_Season_1_7?oldid=5243557"
Community content is available under CC-BY-SA unless otherwise noted.