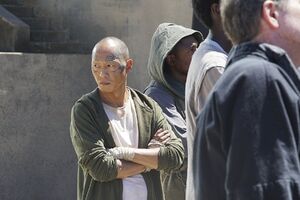 Appearing in "...And Finally: Black Bolt"

Synopsis for "...And Finally: Black Bolt"

Maximus reveals to the Royal Family that he installed a failsafe; that the protective dome around Attilan will destabilize if he doesn't scan his fingerprint every hour. Royal Guards rescue Maximus from Black Bolt while they are on their way to stabilize the dome. Gorgon - still recovering from his resurrection and second Terrigenesis - kills Dr. Declan in his rampage, and is soon apprehended by members of the Royal Guard and thrown in the Quiet Room with Karnak. Gorgon calms down slightly when he is reminded of their familial bond. Even though the Quiet Room was built to withstand Black Bolt's destructive voice, Gorgon's brute strength allows the two Inhumans to escape. Meanwhile, Medusa goes to Earth with the Terrigen Crystals to prepare for an evacuation if Attilan Cannot be saved. Medusa asks Louise to convince her boss to let the Inhumans resettle on Earth. Louise's boss agrees to this plan when Lockjaw and Crystal prove to him that Louise is not crazy and Attilan is real.

Maximus finds Declan's corpse in the Terrigenesis chamber and the Terrigen Crystals gone. As he goes mad trying to find them, Medusa returns to Attilan to make one last attempt to stop Maximus. She uses the last Terrigen Crystal as a bargaining chip to convince him to save Attilan, but he still refuses. Karnak has since discovered a critical flaw in Maximus' plan; that Maximus believes he can stop the destruction of Attilan at any point, but once the shield is down the city will no longer be habitable. The Royal Family broadcast a message to the people of Attilan of Maximus' treachery and how they need to evacuate to Earth. Auran, seeing Maximus threaten to kill everyone in the city for siding with Black Bolt, leaves her post at Maximus' door and joins the evacuation.

While the rest of the Inhumans leave through Eldrac, Black Bolt stays behind in Attilan to deal with his brother. Maximus reveals that years ago he forged their parents' signature on the Genetic Council's recommendation to give Black Bolt brain surgery to take away his powers, the shock from which led Black Bolt to accidentally kill his parents. Black Bolt knocks Maximus out with a punch and drags him to his bunker, which was designed to survive the destruction of the city and the dome protecting. Black Bolt seals the bunker using his voice, and hurries to Eldrac. Black Bolt joins the rest of his people on Earth as Attilan collapses, taking Eldrac with it.

On Earth, the Royal Family promise their people they will face their uncertain future together in their new home.

Retrieved from "https://marvel.fandom.com/wiki/Marvel%27s_Inhumans_Season_1_8?oldid=5278932"
Community content is available under CC-BY-SA unless otherwise noted.