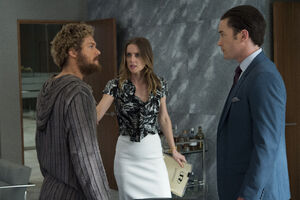 He-he stepped out on the street, right in front of a car but then he just sort of put his hand out and jumped over it like it was nothing.

Danny Rand returns to New York, and to the company that bears his name, 15 years after disappearing in a plane crash along with his parents. He is not welcomed back by the people now running the company he still owns 51% of. Ward Meachum and Joy Meachum, Danny's childhood friends, are now running Rand. Ward in particular is hostile and suspicious of Danny's motives.

After unsuccessfully trying to persuade the Meachums of his identity, and surreptitiously exploring Joy's apartment, Danny Meets Colleen Wing while she is putting up fliers advertising her dojo, the Chikara Dojo. He offers to teach King Fu for her, she politely declines. She is still polite when he turns up unannounced at her dojo.

Danny attempts to persuade Ward of the good sense in giving him a chance by hijacking Ward's car and pointing a hand gun at his head. Ward becomes angry and threatens Danny. In response, Ward tries to have Danny killed, sending Rand security after him, whom Danny defeats.

We see that Harold Meachum is in fact in hiding, living as a recluse in a luxury apartment. Ward visits him and briefs him on Danny's reappearance. Harold is already aware of Danny's return and appears to accept Danny's authenticity. We also meet Harold's assistant, Kyle, for the first time. Harold gives Ward advice about how to proceed with Danny.

Danny visits Joy at her office again, she is apparently welcoming, listens to his story and serves him tea. The tea is drugged and Danny wakes in a mental health facility on a 72 hour assessment. Joy has colluded with her brother and had him committed.

Retrieved from "https://marvel.fandom.com/wiki/Marvel%27s_Iron_Fist_Season_1_1?oldid=5434031"
Community content is available under CC-BY-SA unless otherwise noted.