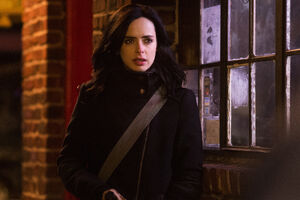 Knowing it's real means you gotta make a decision. One, keep denying it. Or two. Do something about it.

Appearing in "AKA Ladies Night"

Synopsis for "AKA Ladies Night"

Retrieved from "https://marvel.fandom.com/wiki/Marvel%27s_Jessica_Jones_Season_1_1?oldid=5730359"
Community content is available under CC-BY-SA unless otherwise noted.