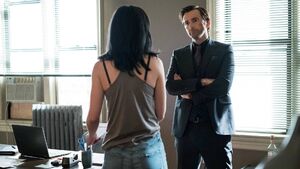 She'll never kill me. Despite her calloused, hard-bitten, and frankly, poorly styled facade... Despite her several problems, she still hopes that, at her core, she just might be a hero. But only if she can save you, the ultimate innocent victim.

A discovery has the potential to change the entire game -- if Jessica can refuse Kilgrave's offer.

Retrieved from "https://marvel.fandom.com/wiki/Marvel%27s_Jessica_Jones_Season_1_10?oldid=5232994"
Community content is available under CC-BY-SA unless otherwise noted.