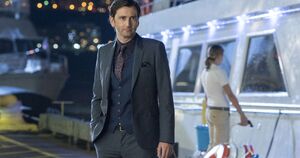 They say everyone's born a hero... but if you let it, life will push you over the line, until you're the villain. Problem is, you don't always know that you've crossed that line. Maybe it's enough that the world thinks I'm a hero. Maybe if I work long and hard... maybe I could fool myself.

Appearing in "AKA Smile"

Synopsis for "AKA Smile"

Jessica Jones rushes Luke Cage to Metro-General Hospital, where doctors continuously tries to inject an IV into him, which failed each time due to his unbreakable skin. Claire Temple steps in but still failed, allowing the doctors to confirm that he has super-powers. Jones manages to convince Temple to help her take Cage back to Alias Investigations Office where she could treat him in secret. Kilgrave goes to the hospital and orders everyone in the hospital to hunt Jones down and kill her. While Jones runs away from Kilgrave, Temple takes Cage to Jones' apartment. In a new apartment, Kilgrave forces his father, Albert to use the aborted fetus of Hope Shlottman and himself to increase his powers. Once Kilgrave is injected with the serum, it causes him incredible pain, making him scream out as his skin and veins briefly turns purple. Kilgrave orders the other two people in the apartment to cut off the his father's arms and destroy them in a blender before killing themselves. At Jones' apartment, Temple meets Malcolm Ducasse, and later saves Luke by draining the cerebral fluid through a needle in the optic canal. Jones goes to the new apartment where Kilgrave is living to find a dying Albert, who warns Jones that Kilgrave has increased his powers. Jones finds a note which has the direction of the Hudson Ferry Terminal, and a picture of a yacht.

Jones meets Trish Walker and they go to the Hudson Ferry Terminal where Kilgrave tries to use his powers to controls her. Seeing that he can't, Kilgrave orders some police officers to shoot down Jones. As Kilgrave makes his way to the yacht, he uses a group of innocent people to block her path. Kilgrave orders the people to kill each other, forcing Jones and Walker to try to protect them. Kilgrave roars with all this might, ordering everyone to stop, which they did, including Jones. Kilgrave briefly believed that Jones was faking but she claims that she wants him to stop the people hurting each other. To mock Jones, Kilgrave orders the person she loves, Walker, to come over to him and claims that he has chosen the wrong sister to love, promising he would rape her continually for the rest of her life and make her his slave while she died inside. Kilgrave promises that if either of them ever saw Jones again, he would make Walker cut her own throat. He then forced Walker to kiss him passionately. Seeing that she has still not move from her spot, Kilgrave becomes convinced that his powers can control Jessica Jones again. Delighted, Kilgrave approaches her and promises Jones that after a while she would love him like he loves her and orders her to smile, she obeys instantly. Overcome with joy, Kilgrave orders her to tell him she loves him, Jones says the words. Jones then grabs Kilgrave's face and snaps his neck, killing him instantly and dropping his body to the ground. Jones is taken to prison. Cage awakes from his short coma and leaves Temple and the building. Thanks to Jeri Hogarth, Jones is free from prison. She reunites with Walker, who later requests her mother all the papers regarding IGH. In her apartment, Jessica Jones reunites with Malcolm Ducasse and she decides to use her powers to help people.

Retrieved from "https://marvel.fandom.com/wiki/Marvel%27s_Jessica_Jones_Season_1_13?oldid=5232997"
Community content is available under CC-BY-SA unless otherwise noted.