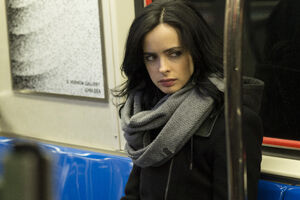 God didn't do this. The devil did. And I'm going to find him.

Appearing in "AKA Crush Syndrome"

Synopsis for "AKA Crush Syndrome"

Like this? Let us know!
Retrieved from "https://marvel.fandom.com/wiki/Marvel%27s_Jessica_Jones_Season_1_2?oldid=6498569"
Community content is available under CC-BY-SA unless otherwise noted.