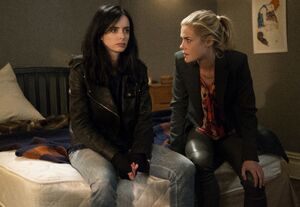 You know what happens when you burn a bridge? You gotta learn to swim. Or fly.

Appearing in "AKA Top Shelf Perverts"

Synopsis for "AKA Top Shelf Perverts"

Malcom, Simpson and Trish go rogue to prevent Jessica from carrying out an extreme plan to outwit Kilgrave.

Like this? Let us know!
Retrieved from "https://marvel.fandom.com/wiki/Marvel%27s_Jessica_Jones_Season_1_7?oldid=6498574"
Community content is available under CC-BY-SA unless otherwise noted.