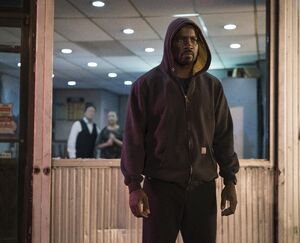 Appearing in "Moment of Truth"

Synopsis for "Moment of Truth"

With tension building in the streets of Harlem thanks to ruthless club owner Cottonmouth, Luke finds it increasingly difficult to live a quiet life.

Like this? Let us know!
Retrieved from "https://marvel.fandom.com/wiki/Marvel%27s_Luke_Cage_Season_1_1?oldid=5234627"
Community content is available under CC-BY-SA unless otherwise noted.