"The Road to Goblin War" 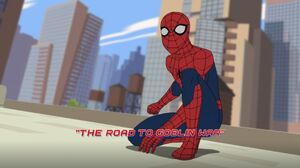 Appearing in "The Road to Goblin War"

Synopsis for "The Road to Goblin War"

Peter Wakes up and expresses how Happy he is to be back in his own body. He tries to reconcile with Max Modell and convince him to lift the ban that's currently barring him from attending Horizon High Due to Ock's actions/behavior as Superior Spiderman, but Modell refuses to forgive Peter for "deeply offending" him at least in part of the latter being under impression that Parker is lying. After Ock also causes Peter to get a poor back at Midtown, attends the cemetery to pay respects to his late Uncle Ben, lamting how Ock is still ruining his life despite the fact the he's back within his own body. Peter is then interrupted by Otto Octavius who also arrived at the cemetery to pay his respects to Benjamin Parker as well. Peter tells Octavious to leave him alone so the latter leaves.

Retrieved from "https://marvel.fandom.com/wiki/Marvel%27s_Spider-Man_(animated_series)_Season_2_22?oldid=5591650"
Community content is available under CC-BY-SA unless otherwise noted.