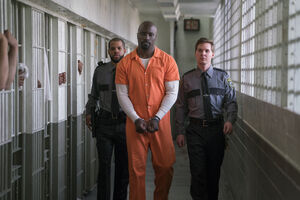 Hero is your word, not mine.

Appearing in "The H Word"

Synopsis for "The H Word"

Danny Rand and Colleen Wing try to save a man in Phnom Penh, Cambodia, but they are unsuccessful and the man is murdered by a mysterious assassin. The dying man tells Danny and Colleen that the real war is in New York City. Back in New York, Jessica Jones is trying to avoid her newfound popularity, Luke Cage returns to the city after finishing his prison sentence, and Matt Murdock resumes his legal career while trying to put his vigilante activity behind him. Luke reunites with Claire Temple and Misty Knight and begins investigating the deaths of several young men who were hired for mysterious courier work. Alexandra, the leader of the Hand, is told that she only has a few months left to live, so she orders Madame Gao to speed up the Hand's plans for New York. Jessica is hired to track down a missing man but finds that his apartment is filled with demolition explosives. Manhattan is suddenly hit by a powerful earthquake, while Alexandra meets with the Hand assassin, who is revealed to be Elektra Natchios.

Retrieved from "https://marvel.fandom.com/wiki/Marvel%27s_The_Defenders_Season_1_1?oldid=6081469"
Community content is available under CC-BY-SA unless otherwise noted.