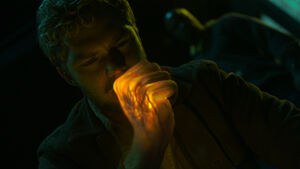 Matt tries to help people after the earthquake. Jessica calls in the cops, including Misty, to investigate the explosives in Raymond's apartment. Misty sees Jessica stealing evidence from the crime scene. Jeri Hogarth warns Jessica not to interfere with the investigation into Raymond; she later asks Foggy Nelson to keep an eye on Jessica in case she gets into trouble. Luke searches for answers on who's recruiting Harlem kids for secret work, and finds a lead to a mysterious man called White Hat. Jessica finds Raymond in her apartment, holding her friend Malcolm hostage; she tries to talk him down, but Elektra breaks in and attacks him. Raymond commits suicide, Elektra escapes, and Jessica is arrested by Misty. Danny and Colleen find a building full of dead bodies, before a gang working for White Hat enter the building to dispose of the evidence. They fight off the gang, but Danny is confronted by Luke; they fight briefly, before the police arrive and force them to flee. Misty interrogates Jessica, but they're interrupted by Matt, who has been appointed as Jessica's lawyer.

Retrieved from "https://marvel.fandom.com/wiki/Marvel%27s_The_Defenders_Season_1_2?oldid=5422558"
Community content is available under CC-BY-SA unless otherwise noted.