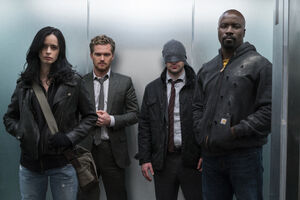 You asked me a question; this is the answer. This is who you are.

In a flashback, Elektra is resurrected by Alexandra and the Hand, and trained to become the Black Sky. Matt gets Jessica out of police custody; she later follows him and sees him demonstrating his athletic skills. Luke and Jessica continue their respective investigations. Luke, Danny, Claire and Colleen meet up to discuss the Hand, but Luke and Danny are initially unable to put aside their differences. Jessica's investigation leads her to an office building designed by Raymond and owned by the Hand, while Matt follows her to try and persuade her not to look into the Hand. Danny confronts Alexandra and a group of her followers in the same building, threatening to use his power and influence as a businessman to expose the Hand's activities; Alexandra is unbothered and orders her followers to attack him. Danny puts up a good fight, but is being overwhelmed until Luke arrives to help him. The two of them meet up with Matt and Jessica and successfully fight off the Hand's men; during the battle, Matt is confronted by Elektra and realizes that she's still alive. All four heroes are able to escape together.

Retrieved from "https://marvel.fandom.com/wiki/Marvel%27s_The_Defenders_Season_1_3?oldid=5235955"
Community content is available under CC-BY-SA unless otherwise noted.