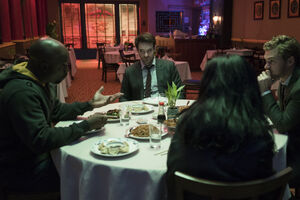 Matt, Jessica, Luke, Danny, and Stick get acquainted with one another while taking shelter in the Royal Dragon Restaurant. A skeptical Jessica leaves the group, not wanting to get involved with fighting The Hand. Alexandra appears with her henchmen and attempts to negotiate with the group, wanting Danny to come with her willingly. Meanwhile, Jessica attacks an undercover Hand operative surveilling Raymond's family before returning to the restaurant.

Retrieved from "https://marvel.fandom.com/wiki/Marvel%27s_The_Defenders_Season_1_4?oldid=5622177"
Community content is available under CC-BY-SA unless otherwise noted.