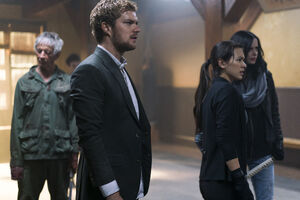 We work together, we walk out of here alive.

While fighting Alexandra's henchmen, Matt isolates himself from the group in an attempt to free Elektra from Alexandra's control. When Hand officer Murakami orders Elektra to kill Matt, Elektra instead rebels against him and attempts to regain her memories. During the ensuing chaos, Luke is temporarily separated from the group, but manages to capture Hand officer Sowambe in the process. The group relocates their respective friends and allies to Misty's police precinct for protection before interrogating Sowambe at an abandoned warehouse. While carrying out the interrogation, the group learns that The Hand wants to use Danny's power in order to unlock something in New York. While discussing their plans, Sowambe breaks free and attempts to take Danny hostage, only for Stick to decapitate Sowambe.

Retrieved from "https://marvel.fandom.com/wiki/Marvel%27s_The_Defenders_Season_1_5?oldid=5422560"
Community content is available under CC-BY-SA unless otherwise noted.