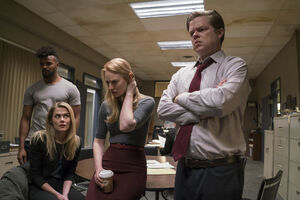 Matt said something before he told us to leave. He said, "Protect my city."

Appearing in "The Defenders"

Synopsis for "The Defenders"

With the aid of Claire and Misty, Colleen plants the explosives in the weak points of the building's infrastructure and decapitates Bakuto in the process. Matt, Luke, and Jessica make their way underground and get involved in an uphill battle with Elektra's men and Murakami. Once reunited with Danny, Matt orders the group to leave the underground tunnels without him in an attempt to save Elektra. The ensuing explosion leads the group to believe that Matt is dead, while the details of their heroics are covered up in order to maintain stability. While Danny, Luke, and Jessica piece their respective lives back together, Matt is revealed to have been saved by a local church elsewhere and is regaining consciousness.

Retrieved from "https://marvel.fandom.com/wiki/Marvel%27s_The_Defenders_Season_1_8?oldid=6081484"
Community content is available under CC-BY-SA unless otherwise noted.