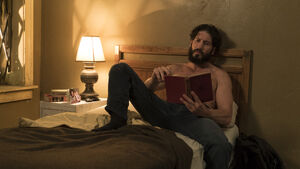 Former Marine Frank Castle takes the law into his own hands while struggling to come to terms with his traumatic past.

Retrieved from "https://marvel.fandom.com/wiki/Marvel%27s_The_Punisher_Season_1_1?oldid=5809978"
Community content is available under CC-BY-SA unless otherwise noted.