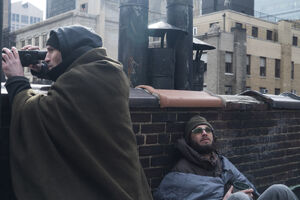 This bomber is intent on spreading fear, but I'm not scared. I know this city will pull together like it has so many times before. The Bulletin may have printed his words, but we've also given his letter to the FBI, because we have faith in the institutions he seeks to destroy. We must not tolerate those who use violence to communicate. This man is not a patriot. He's a coward, a terrorist.

Appearing in "Front Towards Enemy"

Synopsis for "Front Towards Enemy"

Following a deadly explosion, Karen lands in a bomber's crosshairs -- and Frank isn't happy about it. Meanwhile, Curtis makes a grisly discovery.

Retrieved from "https://marvel.fandom.com/wiki/Marvel%27s_The_Punisher_Season_1_9?oldid=5809986"
Community content is available under CC-BY-SA unless otherwise noted.