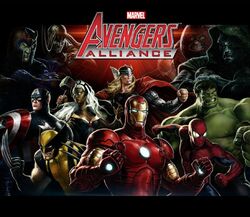 A galaxy-wide disaster known as "the Pulse" has exposed Manhattan to attack from Marvel's most formidable villains. As an agent of S.H.I.E.L.D. (the secret espionage and peace-keeping organization of the Marvel Universe), the player must assemble and lead a team of superheroes to battle evil and save the world.

The mission: keep New York City safe from the clutches of evil.

The first mission deals with the S.H.I.E.L.D. Agent accompanying Iron Man to deal with an attack from A.I.M.. The S.H.I.E.L.D. Agent and Iron Man go to meet up with Captain America who is in combat with the Hydra Power Armor. At the Meat Packing District, Viper is leading Hydra into attacking it. The player's defeat Viper, but the Hydra Agents make off with the device she was securing. S.H.I.E.L.D. Intel tracks the Hydra Agents to Empire State University where A.I.M.'s strike team R.A.I.D. where it is suspected that Whiplash is working with the team. After defeating Whiplash and R.A.I.D., Maria Hill tells Nick Fury that Hydra is sighted in Chinatown with Baron Zemo being sighted. After defeating Baron Zemo who retreats with his Hydra soldier, Maria Hill tells the S.H.I.E.L.D. Agent that there is trouble in the Financial District. Upon arrival in the Financial District, the S.H.I.E.L.D. Agent learns that Wrecker was spotted working with A.I.M. After defeating Wrecker, Black Widow tells the S.H.I.E.L.D. Agent that M.O.D.O.K. is in the area and defeat him. Iron Man informs the S.H.I.E.L.D Agent that the Frost Giants have been spotted near Avengers Mansion upon an inter-dimensional portal opening up in the area. The Destroyer has also been sighted as the players help Thor to defeat it. Upon arriving at Avengers Mansion, the S.H.I.E.L.D. Agent joins Thor into fighting Loki who plans to acquire the "gift" that the heavens had bestowed on Earth. Thor and the S.H.I.E.L.D. Agent defeat Loki who ends up retreating. Nick Fury, Maria Hill, Captain America, Iron Man, and Thor state that the villains are more organized as something has brought Hydra, A.I.M., and Loki together in order to seek the Iso-8. Mister Fantastic tells the group that the Iso-8 has exposed some low-level crooks who now pose a threat to the heroes. The S.H.I.E.L.D. Agent and the heroes plan to secure the samples of Iso-8 in order to stay ahead of the villains. Then, Hulk starts suffering from a strange headache and requests to go to the library, there, he and the Agent's team find Frost Giants, accompanied by Abomination and Ironclad. After defeating them, Maria Hill states that there was some device manufactured in Eastern Europe enhanced with Iso-8 that affects only to creatures with a specific density.

The next team that is seen looking for Iso-8 is The Maggia leaded by Hammerhead, the guess of Iron Man is that they are searching it in order to create a market to sell it, what is very dangerous because it would mean everyone having the power to defeat a god. While defeating Maggia's men a meeting with representatives from all New York criminal families is interrupted by The Thing in Yancy street just before Sandman makes his appearance, but before he is able to do nothing, She-Hulk defeats him and Hammerhead putting him in the Raft, but Sandman manages to run away and give the Vulture something in Bellevue Hospital. The Vulture, that seems to be allied with R.A.I.D. and Crimson Dynamo, is stopped in Bellevue Hospital by Spider-Man before he can do nothing. While defeating him and the R.A.I.D. people, some jack-o'lantern shaped bombs are found, but before going after the one who put these bombs there, the Hand is seen in Hell's Kitchen. Surprisingly some extra-dimensional creatures are seen with the Hand, the Mindless Ones, that, as Dr. Strange says, are Dormammu's servants. Finally the ones leading the Hand appear and are defeated by Daredevil, lifetime nemesis of Bullseye and Elektra the leaders of the ninja attack in the Hell's Kitchen. Another energy signature is tracked near the UN Convention Center and the ones following it are Jack O'Lantern and The Hood, what means that all the things related with the Pulse and Iso-8 are more than cosmical forces acquiring a more mystical sense. After being defeated by Iron Fist another team is seen experimenting with the Iso-8 effects, a lot of tested humans converted into mutants running from who has created them, Magneto. He believes that the Iso-8 is a message from the universe to mutate all the Sapiens and give power enough to the mutants to kill the ones that don't want a Homo Superior era. Before he can say anything more is defeated by Phoenix, who has already defeated Mystique and Juggernaut. After defeating the mutants, some Servoguards, Sentinels, and even Crimson Dynamo are seen out of control, after defeating them Iron Man suspects that the Pulse has broken the electronic things and that someone is using that in his favor.

Maria Hill said that the Servo-Guards are now attacking the St. Patrick's Cathedral. Iron Man is not sure who took over Crimson Dynamo and the Sentinels. Nick Fury deployed Luke Cage on this mission to know who is in charge. Then, Vapor appeared and creates a mist around the Servo-Guards. Luke Cage confronts her and defeated her. Then, Vapor was put in the Raft. The Servo-Guards are led by Whiplash who confronted Luke Cage and mocks him, saying that his whips can cut him open, but Cage defeated him. Whiplash and Vapor are now in the Raft. After a while, the Maggia is here again, now in the Brooklyn Bridge. Thing is in charge of the mission. He saw Boomerang, confronted him, and defeated him. Hydro-Man is in-charge of the Maggia Operations. The Thing confronted him and asked him about what if he drank Hydro-Man, and Hydro-Man said that he would tear him from inside out, then the Thing defeated him but the Hydro-Man escaped in the drain. Then RAID mounted a full-scale assault on the United Nations Complex. Bulldozer is leading the ground operation, then War Machine appeared, confronted and defeated him. Then they learn that Fixer is in charge of the assault. The War Machine confronted and defeated him. They also learned that Fixer is just controlling a robot version of himself from an unknown location, Tony Stark cannot locate his real location because of the Iso-8's concentration on the UN building. After dealing with RAID, Sentinels and the Brotherhood of Evil Mutants are attacking in Times Square. The first Brotherhood of Evil Mutant to confront them is Toad. Stark said that Toad is "Magneto's little pet". Kitty Pryde confronted and defeated him. Then, the man-in-charge is Sabretooth. Sabretooth confronted Kitty Pryde saying that she is Xavier's designated traitor. Kitty Pryde attacked him and defeated him, but he escaped. There was an incoming alert from the Ryker's island, stating that the security at Ryker's is compromised. There was also a heavy fire around the Yankee Stadium. Vulture was being sighted, and Hawkeye confronted him. Vulture said that he was expecting for Spider-Man, but Hawkeye neutralized the Vulture. Then Hawkeye confronted Sandman and defeated him. Green Goblin was the leader of the mission. Hawkeye confronts him and defeated him. Then Doctor Doom appeared and confronted Hawkeye. Hawkeye defeated him and learned that the Doom he fought is actually a DoomBot - a robot version of Doctor Doom. Doctor Octopus has holed up at the USS Intrepid, saying it is the End Times. Nick Fury said that Doctor Octopus has Hammerhead on his side and the Maggia. Then Spider-Man confronted Hammerhead and defeated him. Madame Masque is in-charge of the Maggia thugs. Spider-Man confronted Madame Masque and defeated her and put her in the Raft. Then the perimeter is secured around the USS Intrepid, Spider-Man engages Doctor Octopus in a fight in which he easily wins.

The Green Goblin was hired to shoot down Nick Fury's aircraft, which doubly frightens the heroes because who has enough money to bribe Norman Osborn? While Maria Hill is putting in these inquiries, a riot breaks out at the Raft facilities. It appears that the Abomination is behind it but they know that he is in no way the mastermind. While S.H.I.E.L.D. tries to figure out this facilitators' identity, the heroes are deployed to stop the Abomination and quell the riot. While stopping various violent convicts, Ironclad of the U-Foes is spotted. the Agent is assigned to the Thing to stop Ironclad and bring him back into custody. Ironclad, after being defeated, manages to escape by floating out on the East River and then sinking to the bottom. Stark suggests that cosmic radiation is the reason for Ironclad's ability to float at all. The S.H.I.E.L.D. detachment manages to stop Abomination and quell the riots, however, several villains have managed to escape, including the Vulture, Sandman, Vapor, and the Fixer. Maria Hill believes that these escapees were specifically ushered due to their current association with Doctor Doom. Doom, meanwhile, has stationed his Servo Guards all around Columbus Circle, and Nitro has ambushed She-Hulk in the middle of Central Park, and now Vector of the U-Foes has been spotted. X-Ray is searching for iso-* and recruits Hydro-Man to set up a "mutant rights" protest as a distraction. Johnny Storm and the Agent are able to round up the villains before their missions are successful. Vapor, of the U-Foes, employs the Fixer to help her steal tech from Avengers Tower, however, the Invisible Woman and the Agent stop them both, but not before encountering Magneto. After a brief battle, Magneto leaves. S.K.I.E.L.D. command is not sure if Magneto was there to help Vapor, or to stop her. The team now discovers that numerous Servo Guards have surrounded the Empire State Building. Doom has decided to turn the Empire State Building into "Doomlabs", however, even with the assistance of the Crimson Cowl and Madame Masque, Doom is unable to overcome the Agent and Reed Richards. During all this, Sabretooth, Blob, and Toad were sent to oversee experiments using mutant growth hormone and iso-8. Wolverine was dispatched with the Agent to halt these tests.

Retrieved from "https://marvel.fandom.com/wiki/Marvel:_Avengers_Alliance?oldid=5650757"
Community content is available under CC-BY-SA unless otherwise noted.