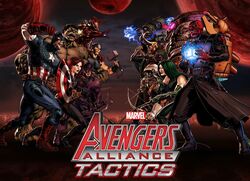 Acting as a sort of unofficial sequel to the second season of Marvel: Avengers Alliance, this game depicts a near-future in which SHIELD must travel to the Savage Land to thwart an increase in the number of incursions threatening to destabilize Earth-12131. The old Agent character from the first game has been promoted to a Commander. Instead of the simple 2D turn-based play, movesets in a 2.5D environment embark the Commander and a handful of heroes through each mission.

Retrieved from "https://marvel.fandom.com/wiki/Marvel:_Avengers_Alliance_Tactics?oldid=5755984"
Community content is available under CC-BY-SA unless otherwise noted.