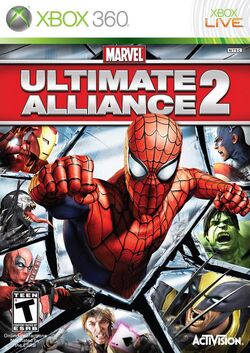 The story begins with the superheroes waging an unsanctioned attack on Castle Doom, Latveria due to the fact that the prime minister, Lucia Von Bardas, markets technology to the Tinkerer, who, in turn, markets them to supervillains in order to upgrade their suits. The President refuses to attack Latveria due to the fact that Bardas has established friendly relations with the American government. The attack on Latveria is successful, ending with Fury's squadron destroying Castle Doom, and Bardas being presumed to be dead.

One year later, Ms. Marvel is reported to be missing after being sent to recover intel on criminal activity. A team is sent to rescue her, and find her interrogated by the Shocker. They then discover that a cyborg Von Bardas has been leading Latveria in an assault on America for the attack on Latveria. Her plan is thwarted by the heroes, however, in the process, a portion of the city has been destroyed, causing the government to consider enacting the Superhuman Registration Act. Nick Fury disappears in light of the incident, and S.H.I.E.L.D. agent Maria Hill is appointed to be the new director. In a television broadcast of The New Warriors, the supervillain Nitro creates a massive explosion, killing over 600 lives and causing the Superhuman Registration Act to be enacted. Captain America, in disagreement of the Act, rebels and forms a team of his own in order to battle those who support the Act. Another team is formed, led by Iron Man, in order to restore peace and thwart Captain America's rebellion. The story then is split into two separate branches depending on player choice: Pro-Registration and Anti-Registration.

The Pro-Registration then creates nanite technology which is used to control the minds of supervillains, aiding them in their quest to defeat Captain America. The two plotlines converge when the Pro-Registration team leads the Anti-Registration team to a chemical plant. Iron Man attempts to negotiate with Captain America, promising amnesty for the Anti-Registration team, but the Captain refuses, resulting in a battle between the two factions. The nanite-controlled villains, however, go haywire and plant bombs all over the chemical plant. Nick Fury returns to the plotline as he tries to defuse the explosives. As the final bomb is about to be defused, however, Venom thwarts Fury's intentions, causing an explosion which incapacitates the heroes. They are brought to a safe house by Nick, who unites the teams in order to defeat the out-of-control villains.

The heroes travel to the Negative Zone in order to bring samples of the nanite formula. The mission is a success and the team escapes, however, Fury's fate is unknown, as he was left behind right after he activated a self-destruct system. The Registration Act, as a result, is suspended, after it is revealed that the nanites have survived and have spread throughout the world. The reunited teams are then split into various groups, with the main group heading to the Black Panther's home, Wakanda. They defeat nanite-controlled agents, and it is revealed that the nanites are now under the control of the group known as the Fold. The team then also discover that Nick Fury has been taken over by the Fold. The groups then establish a base in Wakanda, as the country is safe from the nanite invasion. The team then travel to Iceland, a destination which contains a base under the Fold's control. They then transmit a signal which paralyzes the nanite controlled villains and heroes, allowing them to be cured. The team then battle the Tinkerer, who is the ringleader of the Fold, and defeat him. However, the battle has not yet been won; a nanite-controlled Nick Fury then battles the heroes, ending with the heroes victorious.

There will be changes in the game and camera controls for greater fluidity. The Comic-Con 2008 trailer shows an improvement in the power combo system; instead of merely doing some extra damage, two combined powers will yield a new attack altogether, such as Invisible Woman creating a force field and Iron Man overloading it with energy, effectively creating a bomb, or even the classic fastball special maneuver. [1] The Alchemy engine[2] has been upgraded in several ways, including Havok physics technology, [3] a new 3D sound system[3] and syncing character's lips to dialogue. [4]

The game was officially announced in a press release by Activision on February 8, 2008. The game is scheduled to be released in 2009. [5] At E3 2008, it was given the official name of Marvel Ultimate Alliance 2: Fusion.

Like this? Let us know!
Retrieved from "https://marvel.fandom.com/wiki/Marvel:_Ultimate_Alliance_2?oldid=6462051"
Community content is available under CC-BY-SA unless otherwise noted.